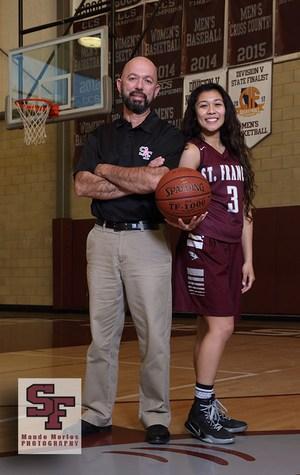 Your St. Francis Men's and Women's basketball teams ended their season on Thursday night with the women's team falling 40-39 to Notre Dame Salinas at Watsonville High School and the men's team falling to Nueva 65-54.
Both teams had great seasons as the women's team were co-champions of the PCAL Cypress division and won a CCS playoff game vs Pacific Bay Christian. The men's team went 17-7 on the season finishing 3rd in the PCAL Mission division and were the only team to beat every other team in the division and won a CCS playoff game over MT. View Academy.
We'd also like to give our congratulations to Janessa Yniguez for finishing her career with 1,008 points as she scored 12 points last night. Yniguez is a 4 year letter winner for the Sharks who was on our 2017 CCS Finalists and was Team Captain this year for our division championship team. Her game high this season was a 33 point performance at Carmel. Congratulations to all our Sharks on a great season. We are proud of you!
Published February 22, 2019 Print